By the Seine, opposite the Trocadéro, Pullman Paris Tour Eiffel offers an unparalleled view of the Eiffel Tower, just 180 m away from the hotel balconies. And all around, a host of culinary and cultural attractions await. Welcomer Monica Castaneda has some hot tips for her visitors. 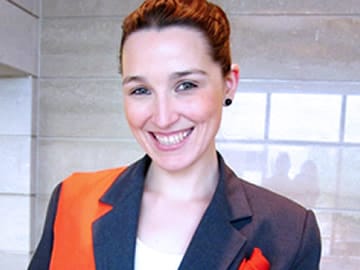 Monica likes spending time at the Brasserie Suffren, a favorite local meeting place.
In warmer weather she prefers a picnic on the Champs de Mars. "Where" and "le Figaroscope" are good sources of information, but colleagues and customers are even better:
"They are out and about, and tell us what's happening". The question she is most often asked? Do you sell tickets for the Eiffel Tower?" (No, buy them there, or on the website). " And the weirdest question ever?
“"Believe it or not - it was 'where is the Eiffel Tower?' - when we're sitting right at the foot of the tower!"

Find out more about this hotel

La Fontaine de Mars
This restaurant was established in 1908. It specializes in French south-west style cuisine, and in 2009 was honored to serve US President Barack Obama. The menu features foie gras, duck and cassoulet.
129 rue Saint-Dominique
75 007 Paris
www.fontainedemars.com

Musée du Quai Branly
This museum is housed in a building designed by Jean Nouvel and features African, Native American and Oceanic art. It has been successful, controversial and provocative since its 2006 opening - don't miss it!
37 Quai Branly
75 007 Paris
www.quaibranly.fr

Bateaux-Mouches
Monica Castaneda enjoys seeing Paris from the river Seine, especially at night, "when Paris is again the city of light" - and many would agree. It's always worth taking a cruise in a 'bateau-mouche', even for long-time local residents.
Port de la Conférence, Pont de l’Alma
75 008 Paris
www.bateaux-mouches.fr

Trocadéro
Monica Castaneda suggests taking the Pont d'Iéna over the Seine to explore the Trocadéro gardens, visit the Architecture and Heritage Center and Naval Museum, and of course get a perfect view of the masterwork of Gustave Eiffel.

Poilâne
French bread is much more than the baguette... This bakery has enjoyed success with its leavened bread recipe since 1932. The bread is made from stone-milled Poilâne flour and Guérande salt, then baked in a wood-fire oven.
49 bd de Grenelle
75 015 Paris
www.poilane.com

Lemoine
The whole of Paris comes here for Lemoine's cannelés, a Bordeaux specialty, with their soft dough center and caramelized crust. The recipe dates from the 16th century, and Lemoine does it in style, with farm eggs and milk, and traditionally crafted rum.
74 rue Saint Dominique
75 007 Paris

Musée Dapper
This private museum opened in 1986 and features a collection of art from the African continent and its diaspora, with frequent exhibitions and performances. Le Café Dapper is the perfect place to take some time out.
35 Rue Paul Valéry
75 016 Paris
www.dapper.fr