St Pancras has been transformed into a buzzing hub for fashion, arts and dining. Venture into the neighborhood Surrounding the Pullman London St Pancras hotel and you’re likely to cross paths with groovy fashion students from the newly located Central Saint Martins College of Art and Design, or with Virginia Woolf fans scouring second-hand bookshops in nearby Bloomsbury.
Pullman Welcomer Robert Louis Seaward prefers the walk from the Regent’s Canal to Camden with its famous market, Food stalls, shops and distant echoes of the area’s glory days as Punk Rock Central. And he notes that Granary Square, situated just behind the hotel, is a spectacular place to relax and people-watch by night. 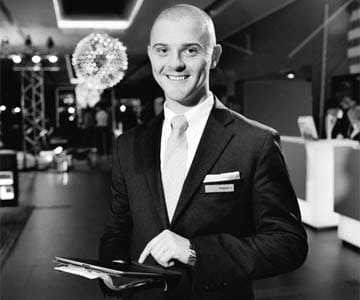 Robert Louis Seaward, Welcomer, Pullman London St Pancras
Robert Louis Seaward used to work in a beach hotel in his native South Africa but prefers his current post. “A lot of hotel staff can be a bit stand-offish,” he points out. “At Pullman, we’re great listeners.” Seaward, 28, has lived in London for 11 years and says he is frequently surprised by guests’ requests. Someone once asked him for a sea-view room. “I said, ‘Sir, we’re a little bit far from the actual sea.’ He was quite disappointed.” The London Eye is the most popular destination, although Seaward tries to offer more interesting alternatives. “I suggest something with more history. Like St Paul’s Cathedral or Winston Churchill’s War Rooms.” His speciality is securing tickets to football matches. He advises guests to try grounds like Tottenham or West Ham because “they’re authentic. You get old guys drinking pints and eating pies. It’s that real passionate feel which makes English football so different.” His favourite part of the job? “When someone goes out of his way to shake your hand and say, ‘Rob thank you so much, we’ve had a great time.’ That’s very rewarding.”

Still the hippest, weirdest fashion store in London created by Rei Kawakubo of Comme des Garçons. The Georgian building off Bond Street (hop on a 10, 73 or 390 red bus outside the hotel) feels more like a film set (think Blade Runner-meets- Trainspotting) than a clothes market, with Cutting-edge fashion, art, jewellery and books sold over six floors.

The British Library is known for its superb exhibitions but don’t miss the permanent display of some of the world’s most dazzling books in the Sir John Riblat Gallery.
Gems include the Magna Carta, Leonardo da Vinci’s notebooks, Oscar Wilde’s diaries and intriguing manuscripts from The Beatles.

“You’ve got modern bars in every country,” Seaward says. “But this is a proper English pub that’s still a bit old school and guests enjoy that.”

Re-live that glamorous Brief Encounter moment at London’s most bubbly art deco-style champagne bar. Says Seaward: “I tell guests to go there and watch the trains come in. It’s a fun way to waste an afternoon.”

The former hunting ground of Henry VIII is a quiet green paradise a ten-minute stroll from the Pullman London St Pancras. Designed by John Nash, Regent’s Park features more than 30,000 roses of 400 varieties as well as an open-air theatre and a lively zoo.