His magazine, monocle, and travel guide series are absolute must-reads for any with-it businessman keen to keep a finger on the pulse of change. At 38, this journalist-turned-entrepreneur is a veritable lifestyle guru. A trailblazer and intrepid traveller who spends his time roaming the world, tracking down the latest trends. "Over 250 days each year are spent out on the road", he says. We catch up with him in london for a chat. 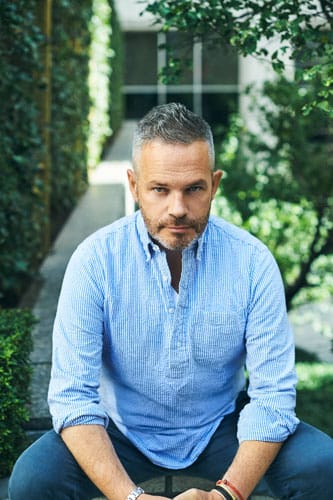 Think Angela Merkel and Jay Z have hectic schedules? They have nothing on Tyler Brûlé. The entrepreneur and magazine publisher may well move in less illustrious circles than the German Chancellor and American pop legend, but he is nonetheless a megastar in his own particular sphere. His speciality? Swimming against the tide. At a time when the majority of magazines are paring down their teams, cutting costs, gravitating towards the web and launching free publications, Tyler Brûlé is doing quite the opposite. What’s more, he’s doing it with style.

Canadian-born Brûlé grew up in Winnipeg, the only child of a local football player and an Estonian artist. At the age of 21, he decided to up sticks and venture to England, embarking on a journalistic career as a reporter for the likes of The Guardian, Stern, Vanity Fair or Focus. After being wounded in Afghanistan whilst covering a story, he spent his convalescence wisely, concocting a brand new publication whose ingenious blend of content covered geopolitics, design and lifestyle: Wallpaper. The magazine, launched in 1996, soon met with resounding success, rapidly winning readers as well as a strong reputation. Brûlé sold the magazine to Time Warner just one year later for 2.3 million dollars, but nonetheless remained at its head… until falling out with the new owner. That's it. Deprived of his editorial plaything, he poured his energy into setting up an advertising agency, Winkreative. But in 2007, unable to resist the magnetic pull of the press, he launched yet another monthly publication alongside his new activity: Monocle. There were no two ways about it - Tyler Brûlé had hit the bullseye once again, his brand new opus serving up a potpourri of content worthy of The Forbes, Architectural Design or the National Geographic, all with his own unique spin, of course. A pared-down layout, generally structured around three columns, flowing texts printed in tiny fonts, unique illustrations and photos, in-depth reports and, above all, the desire to keep readers on their toes by focusing on unexpected topics or locations. Even causing Tyler and his team to be labelled paragons of snobbery at times. This is a man who leaves no-one indifferent. Time to ask a few questions.

Discover the exclusive interview of Tyler Brûlé in the 4th issue of the Pullman Magazine, available at every Pullman Hotels & Resorts, or on AccorPressReader, the digital press service for AccorGuests.